The UK’s political parties are now in full campaign mode following Theresa May’s announcement of the general election which is to take place on 8th of June. With the election fast approaching financial journalists are out in force commenting on what the result’s implication could be for sterling, the FTSE and investors’ portfolios.

These headlines are counterproductive to investors as they encourage short-sightedness, and some will unwisely attempt to take advantage of this unpredictable binary event. As 2016 proved predicting the outcome of elections, and their impact on stock markets, can been a fickle task.

Future returns of the UK stock market cannot be predicted based on the result of the general election or which party is in power and making binary bets on the outcome can lead to probabilistic results. One thing is for certain, general elections create uncertainty in the market, in turn leading to higher volatility and in some cases this can be priced in as a discount. In the coming weeks we therefore anticipate an increase in volatility and possibly a deceleration, even a possible weakening of UK markets. However these are likely to be shorter term trends and changing portfolios based on these would be unwise. 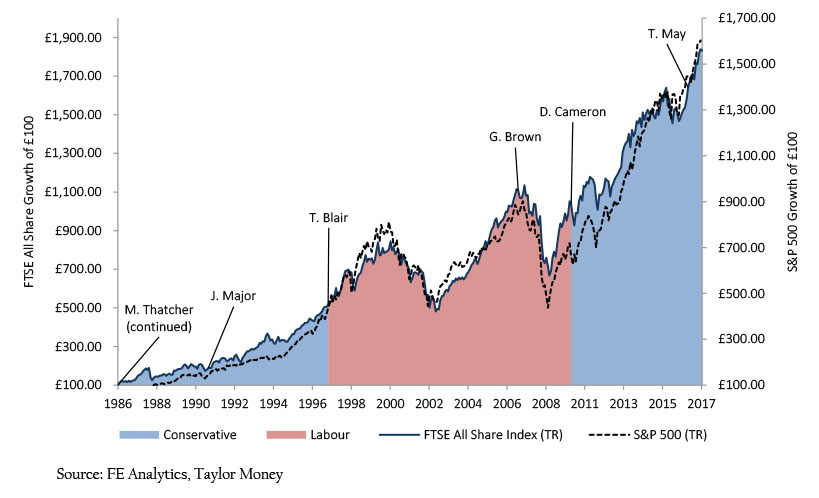 However there are two problems to this conclusion:

The performance of the UK market is more susceptible to global factors rather than that of the UK government’s policies. The performance of the index needs to be put into a global perspective. Showing the S&P 500 total return over a similar period highlights that large and significant movements in the market are not unique to the UK and tend to move in line with the US.

In conclusion we believe the general election will create some short term political uncertainty and markets could exhibit higher volatility. However we take a long-term view to investing, ignoring short-term noise and instead continuing with our longer term investment strategy.

General Disclosures: This research is for our clients only. This research is based on current public information that we consider reliable, but we do not represent it is accurate or complete, and it should not be relied on as such. The information, opinions, estimates and forecasts contained herein are as of the date hereof and are subject to change without prior notification. It does not constitute a personal recommendation or take into account the particular investment objectives, financial situations, or needs of individual clients. The price and value of investments referred to in this research and the income from them may fluctuate. Past performance is not a guide to future performance, future returns are not guaranteed, and a loss of original capital may occur.